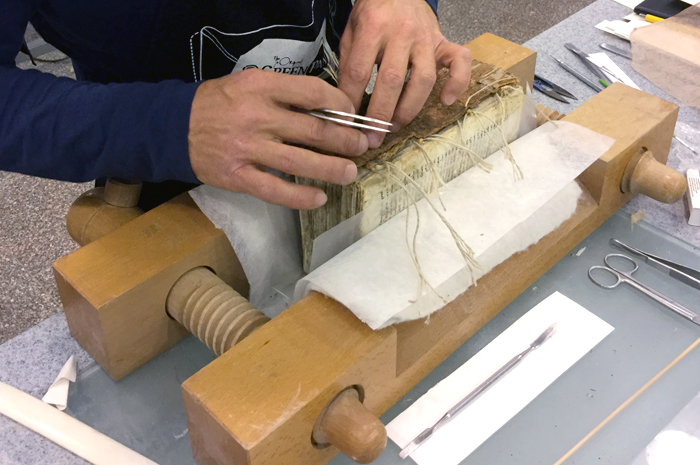 The Levantine Foundation is delighted to announce a grant from the British Council’s £30 million Cultural Protection Fund, in partnership with the Department for Digital, Culture, Media and Sport. Fifty one grants were issued to support projects in the Middle East and North Africa.
The Levantine Foundation was established in 2002 by Elizabeth Sobczynski. Its founding purpose is to preserve cultural heritage in the Near East. Its first major project is at the Deir al-Surian, (monastery) in Egypt. During numerous conservation field campaigns based at the monastery, the collection has been re-housed, surveyed and the conservation of different language codices and fragments have been completed in collaboration with conservation professionals from England and Europe and international scholars in Arabic, Coptic, Ethiopic and Syriac from various universities around the world.
The grant will enable a team of five book conservators to spend the month of May and November 2019 at the Deir al-Surian. Among the codices earmarked for conservation are texts dating from 6th-13thcentury in Syriac, Coptic and Christian Arabic. They will be digitally documented before, during and after treatment and data saved in a bespoke Deir al-Surian database. The new librarian Fr. Amoon will be directly involved in preparation for and follow up to each campaign, as well as in outreach activities. Three novices/local interns selected in collaboration with the Monastery will receive training throughout the campaign in aspects of conservation, including making archival boxes for vulnerable codices.

WE ARE GRATEFUL TO THE BRITISH COUNCIL CULTURAL PROTECTION FUND AND THE DEPARTMENT FOR DIGITAL, CULTURE, MEDIA AND SPORT FOR THEIR GENEROUS GRANT TOWARDS THIS IMPORTANT PROJECT
In December 2019 a seminar and reception will be hosted at the residence of HM British Ambassador to Egypt in Cairo. The forum will give the Foundation an opportunity to review work undertaken in the library, to highlight its significance, to share its conservation achievements to invited guests and to formally thank the scholars and the conservators who have generously assisted with the cataloguing and the working campaigns at Deir al-Surian. The large number of manuscripts and fragments that remain in the monastery represent an inheritance of inestimable scholarly value and form an essential part of the cultural heritage for the World. The Levantine Foundation has benefited from many partnerships and collaborations with international scholars.
This year it is
● Dr. Yury Arzhanov, Division of Byzantine Research, Institute for Medieval Research, Austrian Academy of Science
● Prof. Dr. Alessandro Bausi
● Dr. Denis Nosnitsin, Asien-Afrika-Institut, Hiob-Ludolf-Zentrumfür Äthiopistik, Hamburg University
● Professor Stephen J. Davis, Department of Religious Studies, Yale University
● Associate Research Professor Hania Sholkamy
● The Social Research Centre and Teaching Faculty in the Sociology, Egyptology, Anthropology Department
● The American University in Cairo. The first ever catalogue of the Syriac Collection was published by Peeters Publishers in 2014 and researched by Dr. Sebastian Brock of Oxford University and Professor Lukas Van Rompay of Duke University USA.