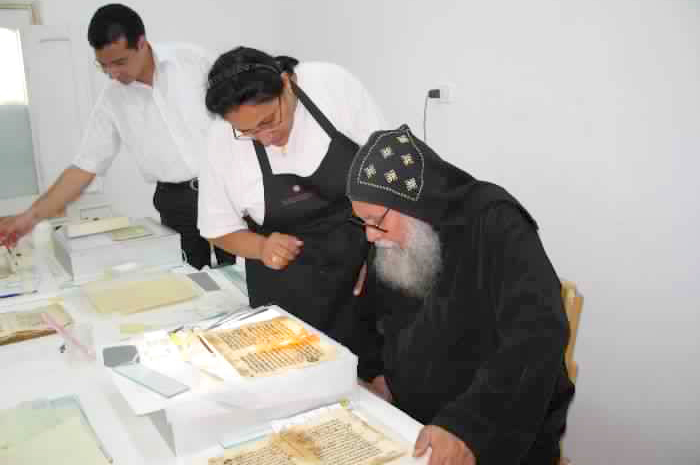 The Foundation’s most important project is to secure the future of the manuscripts in the Deir al-Surian Library.

In the eighteenth and nineteenth centuries a great quantity of Deir al-Surian manuscripts were taken to Europe and are, today, held in several important collections, including the British Library and the Vatican Library.  The large number of manuscripts and fragments that remain in the monastery represent an inheritance of inestimable scholarly value and remain an essential part of the heritage of the entire Christian world.

However, after fifteen hundred years in the environment of a living monastic community, many of the manuscripts are in a parlous state and continue to deteriorate, placing their very existence at risk.

During recent times there has been a revival of the Coptic monasteries in Egypt.  The Deir al-Surian community now numbers over two hundred monks, and a new, committed and educated generation is determined to preserve this unique inheritance, in situ, for future generations.

In order to achieve this goal, Elizabeth Sobczynski, a conservation consultant working with major museums in London, founded The Levantine Foundation in 2002, which has, in the intervening years:

However, the work remains pressing and the ongoing projects include: