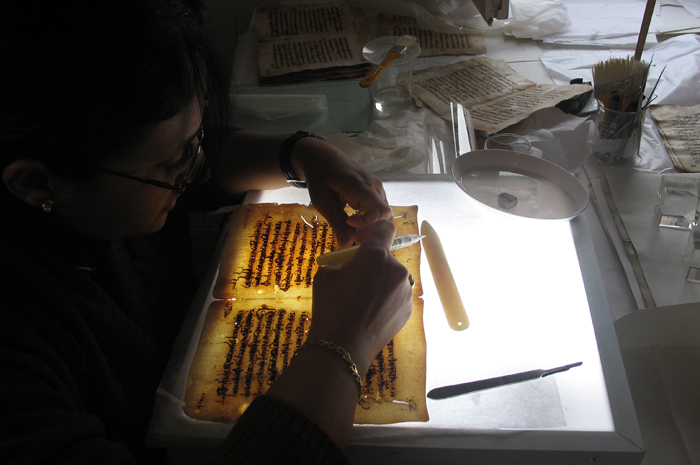 The conservation process begins with a preservation-needs assessment, recording the physical condition of a specific document and continues with relevant preventive or remedial conservation. The aim of preventive conservation is to prevent future damage from occurring, to maintain, and where possible, enhance the condition of document, while managing potential risks, such as handling and environmental conditions. The aim of remedial conservation is to stabilise a document with minimal intervention by using reversible materials and, importantly, retaining its historical character.

Between 2019 and 2021, with the support of the British Council’s Cultural Protection Fund, in partnership with the Department for Digital, Culture, Media and Sport, The Levantine Foundation carried out conservation field campaigns, during which twenty-two ancient manuscripts have been conserved.

Training of monks from the Deir al-Surian, and other, monasteries continues (please see training/conservation Campaigns for details).

Of the large number of codices, individual manuscripts, and fragments to have been fully conserved and placed in protective housing, one of the most important is the earliest known version of the Four Gospels, dated to the fifth century, which was conserved thanks to a generous grant from Mr. John Osborn, who visited the library in May 2016, in company with The Foundation Chairman, Nigel Pilkington, to view the excellent work carried out by conservator Flavio Marzo.

Amongst other important manuscripts that have been conserved are: