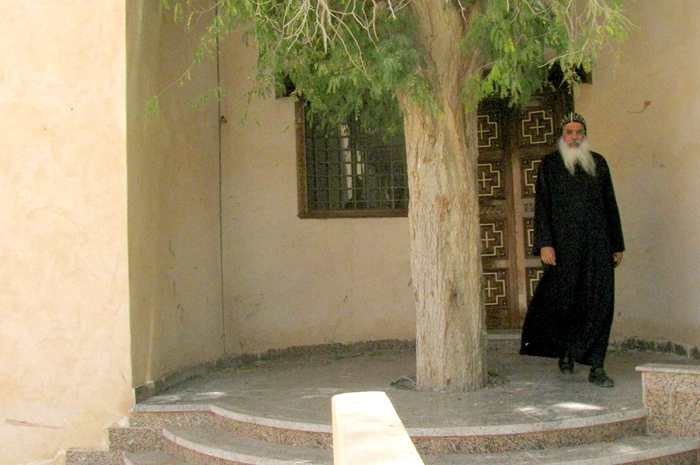 Opening of the New Library

Deir al-Surian
Wadi el Natrun, Egypt
19 May 2013
On Sunday 19 May, 2013, the Deir al-Surian has opened its doors to guests attending the opening of the new state-of-the-art library. The event was held under the patronage of His Holiness Pope Tawadros II, Pope of Alexandria and Patriarch of the See of Saint Mark; His Grace Bishop Mattaos, Abbot of Deir al-Surian; and The Levantine Foundation.
The library was opened by HG Bishop Mattaos, Abbot of Deir al-Surian, and the event attended James Watt, HM Ambassador to Egypt; Sir Derek Plumbly, President of The Levantine Foundation; Mr. Mounir Fakhry Abdel Nour, former Egyptian Prime Minster; Amb. Dr. Mohamed Shaker, Chairman of the Sawiris Foundation for Social Development; Dr Khalil Nougaim, Executive Director of The Levantine Foundation in Egypt; Elizabeth Sobczynski, CEO The Levantine Foundation and many distinguished heads of the Coptic Orthodox Church, and other eminent guests.
The new library, partially funded by the Foundation, has been built within the tenth century walls of the sixth century Coptic monastery to house the priceless collection of ancient Christian Coptic, Syriac, Ethiopic, and Arabic manuscripts, many of which date back to the fifth, sixth, and seventh centuries A.D. The Levantine Foundation is strongly committed to the preservation and recording of these important manuscripts.
The purpose-built library will provide world class storage for the collection and facilities for all aspects of book conservation, including education and training which will enable unrivalled state-of-the-art care for the library’s precious collection. The building is equipped with an advanced temperature and humidity control system for long term preservation, a conservation laboratory, and public access areas such as reading rooms for visiting scholars. Biannual conservation field campaigns organised by The Levantine Foundation will give British, European, and Egyptian conservators unique professional development opportunities to acquire broader capability and ‘extended professionalism’ characterised by independent judgment, involvement in
a community of practice, and the demonstration of practical or intellectual leadership.
Elizabeth Sobczynski, founder and CEO of The Levantine Foundation commented on the new library:
“This is the most exciting moment since the inception of the organisation in 2002. For the past ten years it has been my dream to safely house this unique collection, to ensure its survival for future generations, and with modern technology, make it accessible to the world of scholarship. Now that my dream has been fulfilled, I look forward to working with the collection and training Egyptian conservators on how to best preserve their cultural heritage for future generations”.
The completion of the library is the culmination of ten years of work by the Monastic Council and the Levantine Foundation and marks a turning point in the library’s history. These critically important manuscripts can now be protected and preserved for generations to come ensuring their survival.

In June 2007, the Supreme Council of Antiquities in Egypt granted planning permission to the Monastic Council of Deir al-Surian to construct a new library building within the ancient walls of the compound, to house the collection in a controlled environment in order to provide a world-class storage facility for the ancient manuscripts, while enabling modern museum standards of accessibility and security.

The Levantine Foundation initiated the project, assisting with planning, design, and funding. The project was completed in January 2012, allowing the entire collection to be relocated to the new building in March 2013.