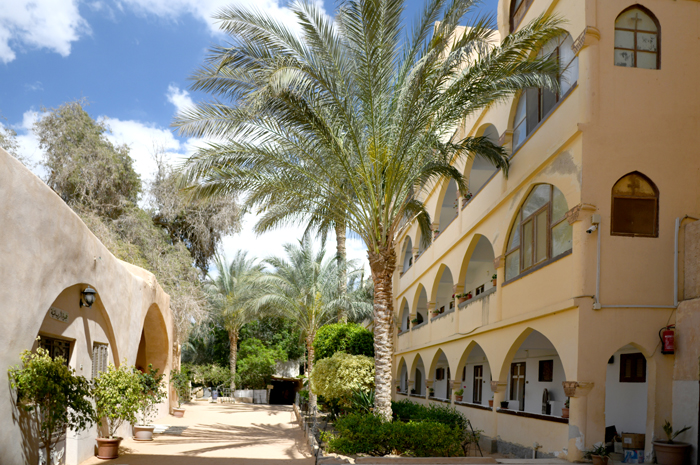 The Monastery of the Syrians

For many centuries, the desert has provided escape and isolation for those who have turned their backs on secular life, to be alone with their god. From the beginning of the first millennium AD, it has been a sanctuary, inhabited by hermits and monks becoming, in the early 3rd century AD, the birthplace of Christian monasticism.

Deir al-Surian, one of the monasteries of the Coptic Orthodox Church, is situated in the Western desert, or Wadi el Natrun, between Alexandria and Cairo. It was founded in the sixth century as a result of a theological dispute over the incorruptibility of the Body of Christ, when monks from the neighbouring Anba Bishoy Monastery left in order to establish a ‘duplicate’ monastery dedicated to the Mother of God (Theotokos).

From the early ninth until the seventeenth centuries, the monastery was inhabited by Copts (Egyptian Christians) and monks from Syria, hence the name Deir al-Surian which means ‘the Monastery of the Syrians,’ while the library, itself, was founded in the ninth century by two Syrian monks, Matthew and Abraham.

In 927 AD Moses of Nisbis, Abbot of the monastery, travelled to Baghdad to negotiate an exemption from the poll tax for the monasteries. During his travels he acquired 250 volumes, greatly increasing the library’s holdings and initiating the ongoing collection of manuscripts. However, following this early period of growth and prosperity, the monastery started to decline and by 1413, according to a note discovered in a Syriac manuscript, the monastery had just one, solitary, inhabitant.

Some years later, the monastery regained its prominence when scribal and library activities were recommenced by Syrian monks, engaged in the restoration of the churches. The nineteenth century guidebook Handbook for Travellers to Lower and Upper Egypt depicts the monastery as ‘the most beautiful convent of all the convents. It is supposed to resemble Noah’s ark in form, but in no other respect: for here the admission of women is strictly prohibited. This convent contains three churches: one of them, Adra Bi Suriani, has a beautifully carved screen door inlaid with wood and ivory, and an iconostasis also inlaid with ivory; in a chapel is a curious double picture on a panel with two saints on one side, and a crowned female head, perhaps Empress Helena, on the other.’

During the seventeenth century the population of Syrian monks decreased, gradually leaving Coptic monks as the sole custodians of the monastery, although by 1832, Lord Curzon, in his book, The Monasteries of the Levant,also reports the presence of Ethiopian monks. In recent years there has been a revival of the community of Deir al-Surian, which, now, comprises some two hundred monks, lead by Bishop Mattaos.