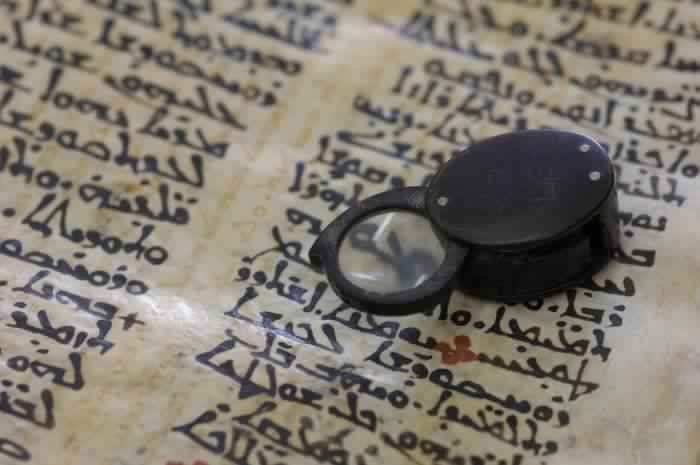 A vital part of recording the collection is the detailed cataloguing of its diverse contents.

June 2019: Stephen J. Davis, Professor of Religious Studies at Yale University has been cataloguing the Coptic and Arabic manuscripts. When complete this catalogue will represent one of the single most important collections of early Christian literature in the world.

February 2019: Denis Nosnitsin and Dorothea Reule, researchers of the Beta Maṣāḥǝft: Manuscripts of Ethiopia and Eritrea Project, based at the University of Hamburg (Hiob Ludolf Centre for Ethiopian Studies)continued their work on cataloguing the Ethiopic collection of Deir al-Surian Monastery. The data collected during their previous visit in 2018 was verified and completed. All twenty-three Ethiopic manuscripts were incorporated into the research environment of the Beta maṣāḥǝft Project, and a full-scale description has been developed for each, which will be continuously expanded to result, ultimately, in a full catalogue of the collection.

For the full report and images, please go to the PDF

26 February – 3 March 2018: The aforementioned, Denis Nosnitsin and Dorothea Reule, worked at Deir al-Surian in order to make preliminary evaluations of its Ethiopic collection. Beta Maṣāḥǝft collaborated with Stephen J. Davis and Yale Monastic Archaeology Project, in order to catalogue the Syriac, Coptic, and Arabic manuscripts of the monastery.

For the full report and images, please go to the PDF

30 September 2014:  Launch of the Syriac Catalogue

The Levantine Foundation proudly launched the Catalogue of the Syriac Manuscripts and Fragments in the Library of Deir al-Surian, Wadi al-Natrun (Egypt), which was the culmination of over eight years’ work by Lucas van Rompay and Sebastian Brock over 8 years work. The catalogue gives a comprehensive description of forty-eight bound manuscripts and over two hundred fragments on parchment, paper, and papyrus, preserved in the monastery. The introduction to the volume emphasises the huge importance of this collection, outlines the history of the monastery, and concludes with an album of well-selected images.

Professor van Rompay stated, ‘Some manuscripts turned out to contain unknown Syriac texts; others provided important new witnesses to texts already known. Since many of the Deir al-Surian manuscripts are very old – a number of them reaching back to the fifth, sixth, and seventh centuries – each manuscript is a treasure trove in its own right,’

To read the full article, please download the PDF